Rhino Handmade, a well known label for so many invaluable limited-edition CD issues which have been satisfying the hardcore collectors’ thirsts, is of course a great project (starting from 1999) by that Rhino Records. As for me, there were so many titles which I wished to obtain in vain. This is the latest release from Rhino Handmade label I could buy the other day.

The group’s entire carrer can be devided into two periods: Autumn Records era in 1964-1966 (two melancholic and melodious hit tunes “Laugh Laugh” and “Just A Little” made many listeners misunderstand that it was yet another group from Great Britain); and Warner Brothers era in 1966-1968 (the band moved to the new label due to the Autum Records’ bankruptcy, and with the producer Lenny Waronker they made so fruitful musical result although they couldn’t gain much popularity and critical appraisement). This 4CD set is a definitive anthology of such band’s entire carrer, featuring many unrelesased tracks, demo takes and very rare mixes. 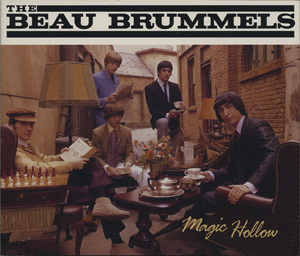 Two important members Ron Elliott and Sal Valentino tried to create innovative sounds with high artistic efforts, but their music was much underrated at the time. Anyway, we can fully enjoy The Beau Brummels’ greatest and fruitful music with this 4CD set. 42 out of 113 tracks are previously unreleased, which makes this Rhino Handmade issue so spesial. 48-page booklet contains the history as well as musical transition of the band in every detail. Also, the booket holds very detailed discographic information (such as personnels of each session, recorded studio and date). However, it must be noted that this 4CD set is NOT a comprehensive collection of the band’s all available recorded materials but an anthology of the band’s artistry featuring many unreleased tracks.

The only regret about this great anthology was the sound quality of the tracks from the album “Triangle”. Actually the 4CD set delivers the great sound of their Autumn years’ materials in monaural, and contains the tracks from their last album “Bradley’s Burn” in excllent-sounding stereo. However, I can’t help feeling incongruity with the sounds from the ”Triangle” album on this CD. 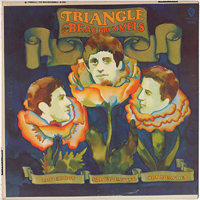 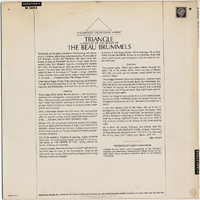 It was sometime in 1994 (at the same shop I bought “Autumn ’66” LP mentioned earlier) when I obtained this original LP. Ten years ago, young listeners paid less attention (than nowadays) to such old music as so-called Soft Rock, Folk Rock, Burbank Sounds et al. I, who didn’t have much preliminary knowledge about the band, somewhat was fascinated with the cover artwork and bought it. Before long, this LP soon became one of my best favourite albums.

Actually this album is really conceptual, and it’s a beautiful kaleidoscope of music. The band (consisting of only three members at the time – Sal Valentino, Ron Elliott and Ron Meagher) recorded such challenging music with the help of Lenny Waronker, Van Dyke Parks and Randy Newman, all of whom were key persons of the golden era of the Burbank Sound. The music heard on this album heavily reflects the atmosphere of that time 1967 in the US West-Coast scene, and at the same time the music has ever-lasting quality through the years. It has full of emotional nuances and imcomparable originalities. Their another fine album “Bradley’s Barn” goes toward the early era of Country-Rock sound with melancholic melodies, but “Triangle” album is also invaluable. 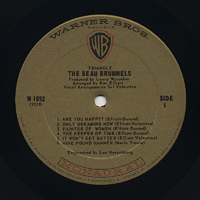 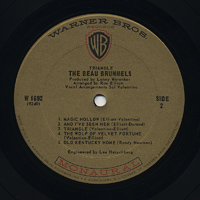 Every release from Warner Bros. label has very attractive and consistent sound quality. Among them, their early monaural recordings in the late 1950s deliver astounding sounds with gorgeous and colourful taste. This “Triangle” album, although recorded in 1967 when too-much equalizations and the use of compressors was very common among popular recordings, still sounds the originality of the Warner Bros. recording team. Beautiful and bold mid-range contributes warm and rich monaural sound which has fruitful “depth”. I had been so familiar with this excellent-sounding mono on the original LP, and it was probably the reason I felt incongruity with the sound on the “Magic Hollow” 4CD set.


A-1 Are You Happy?
A-2 Only Dreaming Now
A-3 Painter Of Women
A-4 The Keeper Of Time
A-5 It Won’t Get Better
A-6 Nine Pound Hammer
B-1 Magic Hollow
B-2 And I’ve Seen Her
B-3 Triangle
B-4 The Wolf Of Velvet Fortune
B-5 Old Kenturcky Home

One thought on “Triangle / The Beau Brummels”